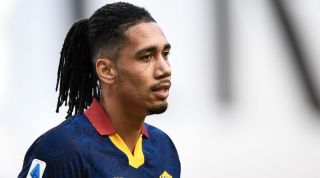 Smalling is a man reborn at Roma; the defender even earned the nickname ‘Smaldini’ after an impressive start to life in the Italian capital.

That might be pushing it, but in a season of ups and downs for the Giallorossi, Smalling has been one of their most consistent performers.

He has bags of Premier League experience, he’s still just 30 years old, and United are unlikely to put up a big fight to keep hold of a player who appears to no longer feature in their plans.

If Arsenal are interested, though, they will have to fend off Roma’s attempts to make the centre-back’s loan move permanent.

The latest reports in Italy say that the Italians want to complete a deal in the next two weeks, but United’s €20 million (£18.1m) demands are deemed excessive – perhaps leaving a window of opportunity for another club to sneak in.

Upamecano is one of the Bundesliga’s most exciting young talents, and a regular in the Gunners gossip columns.

The 21-year-old is also, however, one of the North London club's more expensive options, given his age and the interest being shown in him from across the continent.

Arsenal may have to sell some players to raise the £50 million or so that is likely to be required to prise the youngster out of Leipzig’s grasp.

Reports have claimed that he wants to leave the German club this summer and would favour a move to the Premier League.

But it remains to be seen whether the Gunners will be able to offer him European football next term – something other reported suitors like Barcelona and Bayern Munich will certainly be able to do.

Kumbulla has been one of the standout defenders of the season in Serie A, marshalling Verona’s backline with composure and consistency beyond his years.

The 20-year-old Albanian is good on the ball and comfortable in a range of roles across the back three, but his emergence hasn’t gone unnoticed in Italy.

Lazio and Inter Milan have both been heavily linked with the centre-back, who is rated at €30m (£27.3m), although more recent reports have suggested he could still pen a new deal with his current employers.

A move the Emirates would be a big jump for a player with just one season of top-flight football to his name, but Kumbulla is showing great potential.

Another young centre-back showing great promise, the difference between Sarr and the others is that he is available for nothing this summer.

The 21-year-old departed Nice at the end of his contract after making 19 Ligue 1 appearances before the season was abruptly cut short, and there is a long queue of clubs lining up to offer him a deal.

Whether Sarr would be able to step straight into the Arsenal starting line-up is another question, but his availability as a free agent makes this a tempting opportunity to take a punt on a player who has been coached by none other than Gunners great Patrick Vieira.

If Arsenal want an experienced campaigner to help shore things up, they should look no further than the Brazilian.

The 35-year-old is set to leave PSG at the end of his contract this summer after a glittering spell in France – although recent reports have suggested that the capital club might yet make a U-turn on their decision to let him go.

Silva would be reunited with David Luiz in London should he make the move, and he still has plenty to offer despite his advancing years.

The 88-time Brazil international skippered PSG to their seventh Ligue 1 title in eight years this season, and has featured heavily in their run to the Champions League quarter-finals, where they will face Atalanta.

Silva is on an eye-watering salary in the French capital, but a report in the Telegraph last month said he is willing to take a huge pay cut in order to have a swansong in the Premier League.