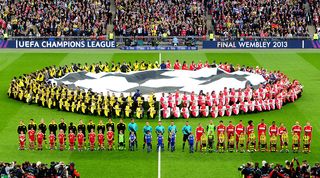 The 2019 Champions League Final features two teams from England – so if you can’t name either of those two, we’re in a world of trouble.

As this year shows, not every club to feature in a European Cup/Champions League final is one of the continent’s traditional elite super-clubs. From 1956 to 2019, every club to ever take part in this prestigious match is below – and there’s a fair bit of diversity.

England actually has the greatest range of finalists with eight, with Italy and Germany both having contributed six. Belgium, Scotland and Sweden just have one club apiece, but that’s still more than most countries, including the Luxembourg National Division. Ah well. There’s always next year, Luxembourg!

Now, eight minutes are on the clock, and each club’s total finals (including 2019) and domestic league is below. Please tell us your score @FourFourTwo – we’ll retweet the best, if you don’t give answers away – and then challenge some Euro-knowledgeable pals too.

Quiz! Can you name all 31 British players to appear in a Champions League final?