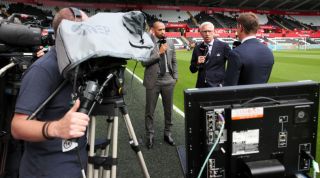 There will always be a section of football fans who think that dastardly TV companies don’t show enough of their beloved team (except, say, Crystal Palace fans this season, who might think it’s rather cruel when their side are on TV this season). Sorry, Eagles supporters.

Even within the Premier League, the gulfs between clubs when it comes to live screened games is vast – and now we have the data to illustrate this. The below chart covers every current Premier League side’s live games for the last five seasons – across channels, across competitions.

No prizes for guessing who comes out on top with 214 matches, especially since Manchester United haven’t had a non-televised FA Cup tie since 1904 (OK, it might be 2004 – but who’s counting?). Their 54 televised matches last season is actually a British record – albeit one only made possible by United's extended cup runs.

Arsenal are the only other club who’ve been on TV 200 times in the past five years, but plenty of those have been on BT Sport and terrestrial channels. Chelsea and Manchester City actually pip Arsenal in terms of live Sky games (although it’s close). Meanwhile, ITV simply love Tottenham, televising 33 Spurs games.

See below for the full table, all thanks to the good folk at Moneysupermarket.com, who provide a breakdown on their own site.

We’ve also included a chart monitoring the live TV output so far for 2017/18, so you can see the direction that’s heading in – although only Sky and BT have broadcast matches so far this season.

Lots of love for Liverpool this season – partly because they've played two Champions League qualifiers against Hoffenheim (Everton also trousered those early in the summer); also because their League Cup defeat to Leicester was shown. Five of Manchester United's six Premier League matches have been shown this campaign, meanwhile – a joint-high with Arsenal.

It's sorrys all around for Burnley, Southampton and Watford, however – those teams have only been on the box once apiece so far this season.