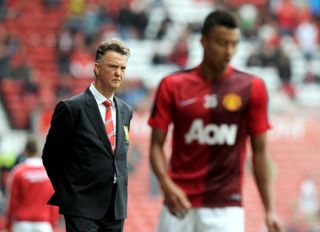 Louis van Gaal's first competitive game as Manchester United manager was perhaps a touch too competitive for the Dutchman's liking: the Swans shocked their hosts with the kind of eyebrow-raising Old Trafford defeat that became such a habit under David Moyes.

Nobody was too surprised when Van Gaal picked a 3-4-1-2 formation, although some of the personnel had the hacks a-Googlin': Tyler Blackett played at left centre-back with Jess Lingard at right wing-back (and Ashley Young on the opposite flank). Neither academy graduate let the team down, but at half-time Van Gaal abandoned the back three and switched to a 4-2-3-1: so much for the tactical revolution.

By that time Swansea were leading through a well-executed, if hardly difficult, counter-attack: Ki Sung-Yeung was left completely unmarked to collect and dispatch Nathan Dyer's pass. United levelled through a short-range overhead kick from new captain Wayne Rooney on 53 minutes, but there was to be no happy beginning for the new skipper or gaffer.

With United's underachieving midfield increasingly resorting to the long ball forward – a situation seldom helped by the arrival of substitute Marouane Fellaini – it was Swansea who scored the game's third goal, handed to them by more poor defending (ersatz left-back Young failed to deal with sub Jefferson Montero's cross) and a slice of luck (Wayne Routledge's scuffed shot landing perfectly for Gylfi Sugurdsson to snaffle).

Van Gaal may have proved himself open to new ideas – implementing a back three but being equally ready to abandon it if necessary – and refused to criticise his players, but he will not have enjoyed being beaten by a rookie manager. Garry Monk, of course, will be rightly delighted with his side, top of the nascent league.

Top-flight newbies Leicester merrily traded blows with top-four contenders Everton in a game with two dozen  efforts on goal, almost perfectly divided between the two teams: the visitors shaded the shot-count 13-11, but each side had three attempts on target and five efforts off-target.

Amid a party atmosphere at the King Power Stadium, Everton quickly settled into their ball-hungry ways – they ended the game with 63.7% possession and completed 504 passes to Leicester's 259 – and took the lead through Aiden McGeady's gorgeous 20th-minute curler. However, Nigel Pearson's men didn't win the title last year by giving up and within 95 seconds they were level, record signing Leonardo Ulloa paying off the first slice of his £8m fee by forcing home the leveller from a corner.

Everton nosed back in front before half-time when Steven Naismith cleverly finished inside the area, but gutsy Leicester refused to buckle and with four minutes left, sub Chris Wood – on for Ulloa – curled the ball home from just inside the area to earn the home side a share of the points.

Analyse it with Stats Zone • Report • Reaction from Pearson and Martinez

Harry Redknapp's triumphant return didn't go quite to plan as Hull beat QPR at Loftus Road despite the loss of Robert Snodgrass to a worrying injury.

Steve Bruce's side have already begun their season in earnest, with the Europa League clashes against AS Trencin as a result of reaching the FA Cup final last season. Upon their return to London, the Tigers fought hard for their points in a fairly even game – Rangers had 51.1% possession and the two sides posted near-identical pass totals (see Stats Zone screen below).

QPR had the better of the first half, registering nine shots to Hull's three (none of which demanded a save from Robert Green). However, Loic Remy – tipped by many to have left the club by now – was wasteful, failing to score with any of his five attempts on goal, and the home side's profligacy in front of goal was summed up when Charlie Austin's weak late penalty was comfortably saved by Allan McGregor.

That made a winner out of James Chester, who had headed home a Stephen Quinn corner after outmanoeuvring Rangers new boy Rio Ferdinand at the back post. As with Manchester United, the home side abandoned their much-discussed 3-5-2 formation as they chased the game, but as with Manchester United, it did them no good – unlike Hull, who have used a back three for a number of seasons and seem quite good at it.

Analyse it with Stats Zone • Report • Reaction from Redknapp and Bruce

In the week that their former hero Tony Pulis hit the headlines and the road, Stoke played like a team in transition, or perhaps still in the changing room. With Mark Hughes fielding three new signings, the Potters also announced shortly before kick-off that they had signed Victor Moses on a season-long loan. They certainly need more penetration up front; whether Moses will provide it remains to be seen.

Stoke registered 12 shots to Villa's seven, but only two of them were on target. New face Bojan Krkic, brought in from Barcelona, typified Stoke: inventiveness outside the box and inaccuracy inside it, with none of his three efforts bothering Brad Guzan. (He wasn't the worst offender: Marko Arnautovic managed to miss the target with all four of his attempts.)

By contrast, Andy Weimann dispatched his only attempt – five minutes after the break – with enviable efficiency. Under Paul Lambert the Villans have tended toward the smash-and-grab, habitually surrendering possession while their opponents pile up the passes; it can invite capitulation, but occasionally it rope-a-dopes the unwary and this was just such an occasion. Stoke had 35.4% of the ball and completed 431 passes to Villa's 189, but the points went south down the M6.

Analyse it with Stats Zone • Report • Reaction from Hughes and Lambert

Although perhaps not a fixture you'd expect to build a Match of the Day around, West Brom vs Sunderland rarely lacks goals: there's only been one 0-0 in their last 23 meetings. And on this occasion, unlike the last time Sunderland came to town – when Paolo Di Canio fronted up the away end – the teams played nice and shared the goals.

It's not often that "Lee Cattermole" and "thunderbolt" are sentence neighbours but the pugnacious midfielder lashed the Mackems ahead early doors from 25 yards. That was arguably against the run of play and certainly Sunderland didn't exactly force the issue thereafter, allowing Alan Irvine's team to get up some steam.

Saido Berahino bagged a brace for the Baggies, levelling from the spot just before half-time when Neil Swarbrick puzzled Gus Poyet by decreeing that Valentine Roberge had fouled Victor Anichebe, then casually side-footing home a tempting cross from Sunderland old boy Craig Gardner.

By that point each side had seen goals disallowed – West Brom through Craig Dawson, Sunderland through Steven Fletcher – but the officials had no problem with Seb Larsson's late leveller, swept home after good work by debutant Patrick van Aanholt. Each manager professed himself satisfied with a point, but each may be more keen to get all three by the time the teams clash again in late February.

Analyse it with Stats Zone • Report • Reaction from Irvine and Poyet

After thrice losing to West Ham last season Spurs gained revenge in delicious style, with a goal in time added on after the Hammers had been on the front foot for most of the game.

Sam Allardyce – under such pressure that he was still the bookies' favourite to be the first top-flight manager sacked even when punters were pouring thousands on Tony Pulis – bristled at goalscorer Eric Dier's suggestion that the home side were "direct", and some of the stats back him up: of West Ham's 409 passes, 356 were short and a healthy 344, or 84%, completed – not the mark of a team that lumps it mindlessly. That said, they did attempt 53 long balls to Spurs' 23.

More worryingly, however they got the ball forward they didn't use it very well up at the sharp end: although they registered 18 attempts to Spurs' 10, each side got four on target – typical of the Hammers, whose 37% shot accuracy last season was the top flight's worst.

The home side had a numerical advantage for half an hour either side of half-time, with Kyle Naughton somewhat questionably sent off for hands before James Collins rather daftly collected a second yellow. To make matters worse for Allardyce, Mark Noble chose the derby to miss his first penalty in 11 attempts – and just when it looked like the game would end in a draw, Dier drifted forward and calmly rounded Adrian to give Mauricio Pochettino a debut win. Spurs were far from brilliant, but you wouldn't find a frown in the away end at five to five.

Analyse it with Stats Zone • Reaction from Pochettino and Allardyce

Tony Pulis would be spinning in his grave, if he were dead rather than simply in a huff: Palace capitulated by conceding two goals from set-pieces as Arsenal coughed and spluttered their way to a first opening-day win in five attempts.

The south Londoners may have lost Pulis but his spirit remains and under caretaker Keith Millen Palace were the same obdurate opponents, dropping into a 4-5-1 without the ball and hoping to spring a surprise on the break. Arsenal dominated possession but went behind 10 minutes before the break when Palace new boy Brede Hangeland broke a three-season scoring duck, back-headering home after outmuscling Alexis Sanchez and Laurent Koscielny.

Maddeningly for Millen (and presumably Pulis, somewhere), Palace couldn't hold on until half-time – and the roles were almost exactly reversed, as Sanchez hoisted an injury-time free-kick over the defence, where Koscielny outsmarted Hangeland to score his own back-header.

After the break Millen's men again stood firm against home possession, even as Arsene Wenger threw on Olivier Giroud (for the willing but limited Yaya Sanogo) and Alex Oxlade-Chamberlain; Arsenal eventually completed 637 passes to Palace's 123. The visitors could have coped with Jason Puncheon's second yellow in the 89th minute, but as the game ticked into overtime they again conceded from a set-piece, Arsenal's various creative types repeatedly hoisting the ball into the danger zone until Aaron Ramsey found himself unmarked in an unmissable position. Relief for Arsenal, disbelief for Palace, but both will need to improve if they're to reach their goals.

Analyse it with Stats Zone • Report • Reaction from Ramsey