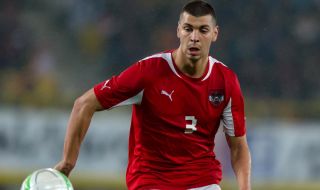 Aleksandar Dragović has packed a lot into his 23 years. Born in Vienna to Serbian parents, he has already played club football in three countries, won six trophies and 35 caps, attracted the attention of several Premier League clubs and garnered criticism for repeatedly slapping the Swiss Defence Minister's bald head.

He might be in the Premier League by July, or even the end of January. Manchester United are currently heavily linked with the £13 million-rated centre-back; Arsenal have tracked him since before his summer 2013 move to Dynamo Kyiv; and he has also been linked with Liverpool and West Ham.

He's certainly not been shy of moving around since spending the first 14 years of his career at Austria Vienna, where he had been on the books from the age of six.

A first-teamer at 17, he has been a regular for the full national squad since shortly after his 18th birthday.

By 2010 he was telling UEFA.com that "If you are good, you can make it anywhere," before ominously adding "Every footballer wants to play in a big league at some point." In January 2011, while still a teenager, he switched to Swiss Super League side FC Basel, promptly winning the first of three successive league titles.

Having excelled in Switzerland, Dragović looked beyond the Alps. In July 2013, he moved to Dynamo Kyiv for €9m on a five-year contract – despite interest from Arsenal (officially acknowledged by Basel’s sporting director Georg Heitz) and Inter, prompting him to keep his options open by saying "I would love to play in Serie A in the near future, as well as in the Premier League.” Sooner or later, he may be on the move again.

Although aggressive, Dragović has a patient side to his game as well. Happy to stand his ground, he doesn't rush in and tackle unnecessarily. He gives a very solid presence at the back and can dominate the box, but he can also work his way forward and help start attacks from the back.

Perhaps his biggest strength is his game intelligence. Incredibly mature and composed as a leader, he has good communication and organising skills which ensure that defensive lapses don't occur. The 23-year-old knows what to do when, and for that reason he is an asset in the side. At Basel in 2012, he was named Best Defender in the Swiss League’s Golden Player Awards.

"You can always improve in every area,” Dragović once said. "I still have work to do when it comes to my pace, my physique and my heading game.” Fair enough, that was back in 2010, but remember that other quote that “Every footballer wants to play in a big league at some point”? His lack of top-level experience may mean he has some more learning to do when he moves to a higher class of football.

According to UEFA’s coefficients, Austria has the 16th strongest league, Switzerland 11th and Ukraine 8th, so he’s heading in the right direction. He’s also had plenty of European experience – 57 appearances and counting, although all but 14 of these have been in the Europa League: during Basel’s run to the last four in 2013 he played in every game bar the semi-final second leg at Chelsea, for which he was banned.

Not the sort to switch off when off-duty, Dragović is a self-confessed football geek who carefully studies his statistics (saying he wants to “play perfectly”) and watches footage of his old games with his grandfather, whom he calls a "bigger nut" than him. To relax, he peruses YouTube player montages and watches other European football matches, namechecking Real Madrid duo Sergio Ramos and Raphael Varane as players he admires.

Dragović caused trouble while celebrating FC Basel’s cup victory in May 2012, slapping the balding head of the trophy-presenting Ueli Maurer – then the Swiss Minister for Defence and Sports (and later the President). Public criticism prompted Basel's media chief Josef Zindel to say "Dragović was naive in his euphoria. He had no idea who Ueli Maurer was.” The player apologised but later admitted “On the inside everybody knows, so I believe, that it was very, very much fun doing it.”

Nine winters ago, Manchester United signed Serbian centre-back Nemanja Vidic from Spartak Moscow. That worked out well, and with United’s rearguard in desperate need of reinforcements – Vidic and Rio Ferdinand have gone, while questions remain over the futures of Jonny Evans, Chris Smalling and Phil Jones – Louis van Gaal could well be tempted by an intelligent young player. But will he be challenged by previous suitors Arsenal, who can offer Champions League football, or Inter, closer to his homeland?