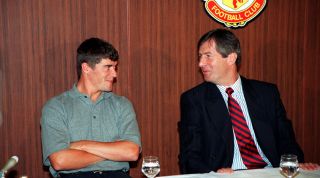 Blackburn boss Kenny Daliglish had no doubt that Keane was a man of his word. After Nottingham Forest’s relegation from the Premier League, the midfield dynamo was on the verge of moving to Ewood Park. Negotiations had been completed late on Friday afternoon when Dalglish realised that he didn’t have the right forms with him and, with the office shut, they would have to wait until Monday to complete the deal.

That wasn’t an issue until Alex Ferguson intervened; a phone call was all it took to convince Keane that his future lay at Manchester United. They met the next day and an agreement was quickly reached. While Dalglish and Blackburn left to fume, Keane and Ferguson went on to create a dynasty at Old Trafford.

Impressive form for Hoffenheim led to plenty of Premier League interest in Ba in 2011. To force a move he refused to attend the Bundesliga side's winter training camp, and the relationship between player and club fell apart. Stoke looked to be the beneficiaries, with Hoffenheim accepting their £7.1m offer for the striker.

Personal terms were agreed and Tony Pulis was convinced that he had the goalscorer he craved. Unfortunately, a medical revealed underlying knee issues that had previously scuppered a transfer to Stuttgart, and Stoke pulled out of the deal. Ba ended up at West Ham instead and later went on to play for Newcastle and Chelsea, scoring 50 goals in English football.

Since the days of Johan Cruyff, Barcelona have had a productive relationship with Dutch players and managers. During his second spell in charge of the club, Louis van Gaal was looking to add another Holland international to a squad that already included Patrick Kluivert, Marc Overmars and Frank de Boer among others.

Chelsea’s Hasselbaink, who'd previously worked under Van Gaal with the national team, was identified to ease some of the goalscoring burden on Kluivert. A fee was agreed and the move would have been completed if it wasn’t for a 2-0 defeat by Celta Vigo that spelled the end for Van Gaal at the Camp Nou.

It seemed for all the world like a done deal. In summer 2013, everything had been put in place and Willian was set to become a Tottenham player. There had been rumours of interest from Chelsea, but nothing concrete – until a late offer spoiled Spurs’ best-laid plans.

Willian, who was then plying his trade for Anzhi Makhachkala in Russia, was at Tottenham's training ground when his agent informed him of a new bid. Despite protests of foul play from Daniel Levy, Willian headed across the city to sign for the Blues instead. Chelsea fans still sing about it to this day.

They might have snatched Willian from Spurs, but Chelsea haven’t always got their own way in the transfer market. Despite a prolonged courting process, a big offer and the promise of a long-awaited Premier League title, Gerrard couldn’t quite be convinced to follow through with a move to the reigning English champions.

It was a saga that dominated summer 2005, as Jose Mourinho made signing Gerrard his top priority. The Liverpool captain handed in a transfer request just weeks after he’d lifted the Champions League trophy, and his departure felt inevitable. But when Liverpool supporters threatened to turn against him, the Merseyside hero dramatically reversed his decision.

Real Madrid wanted a goalkeeper to succeed the legendary Iker Casillas, who had recently left for Porto, and settled on De Gea as their first choice. Their pursuit of the Spain international was public knowledge and negotiations rumbled on for several weeks as the end of the transfer window crept ever closer.

In the end it all came down to the final few minutes and a huge deal involving two of the world’s biggest clubs allegedly collapsed because of a faulty fax machine. The deadline passed without the required paperwork being completed, and De Gea remained at Old Trafford. He’s still there now, admired and respected... yet short of silverware.

Following his on-pitch scrap with Kieron Dyer, Bowyer was encouraged to find another club. Birmingham thought they’d snagged him but a group of supporters got in the way: unhappy at the prospect of signing the controversial midfielder, they started an online protest which caused Bowyer to change his mind.

Steve Bruce and owner David Sullivan were far from happy at missing out on one of their main transfer targets in such unusual circumstances, with the former Leeds man electing to remain at Newcastle instead. Four years later, with his reputation much improved, Bowyer eventually joined the Blues after all.

Spilled milk and fallen trees: the rise and fall of Palmeiras, destroyed by a dairy company

After an unexpected breakthrough at Swansea last season, James was already a wanted man by the January transfer window. Promotion-chasing Leeds agreed a loan deal with a permanent transfer to follow if they reached the Premier League, and everything seemed to be heading towards an amicable conclusion.

James passed his medical and spent much of transfer deadline day at the club’s training ground waiting for the formalities to be finalised. But they weren’t. Swansea had second thoughts and backed out of the deal at the last moment, frustrating Leeds and James.

Five months and a few more blistering displays later, and the winger was signing for Manchester United instead. Maybe everything worked out for the best in the end - unless you're a Leeds fan, that is.