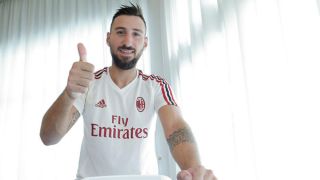 AC Milan have signed Antonio Donnarumma, the brother of Gianluigi, on a four-year contract.

Antonio Donnarumma, a 27-year-old who is also a goalkeeper, has moved on a permanent transfer from Asteras Tripolis.

His deal was confirmed on Wednesday, a day after Gianluigi signed a new contract at San Siro, also until 2021.

The elder Donnarumma is a former Milan youth keeper, who left to move to Genoa in 2012, where he only made one Serie A appearance across four years.

Antonio has also spent loan spells in Serie B with Piacenza, Gubbio and Bari.

He spent one season with Asteras in Greece's top flight and has now moved back to Milan, where he will provide back-up to Gianluigi along with Gabriel and Marco Storari.

"The first thing we had to do was to renew Gigio's contract, but I immediately had the idea of bringing in his brother Antonio too," he said.

"The technical evaluation comes first and I think Antonio can be a 12th man for Milan.

"He is not a postage parcel like someone said. I'm sorry for him if certain things have been written. Vincenzo Montella also endorsed this signing.

"I know him well and I wanted to bring the family back together. I'm proud to present the Donnarumma pair."

Antonio added: "I will be in the dressing room with my brother, which makes me very happy. It is a beautiful thing to be back at Milan."