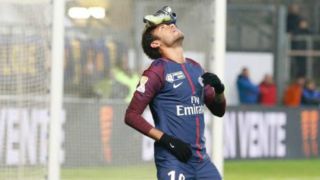 Neymar reached 20 goals for the season as Paris Saint-Germain booked their place in the Coupe de la Ligue semi-finals with a comfortable 2-0 away win over 10-man Amiens.

Unai Emery's men, who are seeking the trophy for a fifth consecutive year, were handed a major boost towards the end of the first half when home goalkeeper Regis Gurtner saw red for a foul on Kylian Mbappe.

Neymar won and converted a penalty shortly after the break to continue his fine start to life in France and put his side on course for victory.

Mbappe and Marquinhos both hit the woodwork, before Adrien Rabiot struck late on to ensure PSG won their sixth straight game across all competitions.

The visitors join Monaco, Rennes and Montpellier in the last four and remain on track for another domestic clean sweep, having thrashed Rennes 6-1 in the Coupe de France last weekend in their defence of that piece of silverware, while they sit nine points clear at the top of Ligue 1 ahead of Sunday's trip to Nantes.

Amiens, meanwhile, have lost six of their last seven games despite putting in a creditable showing with a numerical disadvantage, though an upset never looked likely.

1 - has scored in his first game in the four competitions he played in with (Ligue 1, Champions League, Coupe de France & Coupe de la Ligue). Inauguration. January 10, 2018

PSG had the only chance of a quiet start to the match when Julain Draxler cut back for Neymar, whose first-time effort from 12 yards was kept out by Gurtner.

Amiens were largely restricting PSG to deep possession, but any realistic hopes they may have had of a cup upset came to an end after 34 minutes.

A long ball sent Mbappe racing towards goal and Gurtner made a poor decision to charge out in an attempt to clear, but only succeeded in taking the PSG forward out just outside the area after being beaten to the ball.

Harrison Manzala shot straight at Kevin Trapp to conclude a rare Amiens attack at the other end, but PSG were finding the route to goal easier against 10 men.

Neymar squandered a good chance by heading wide from Draxler's right-wing cross and injured his rib in the process, though he was able to continue, while Mbappe forced an excellent stop from Bouet after a neat one-two with Marco Verratti.

And the visitors were in front within eight minutes of the second half. Neymar won the penalty himself, drawing a foul from Amiens captain Thomas Monconduit after a slick exchange of passes with Di Maria.

With Edinson Cavani still absent after returning late from the mid-season break, there was no conflict over the taker and the Brazil international stepped up to coolly send Bouet the wrong way.

Soon after the goal, Mbappe twisted past Julien Ielsch before seeing his thunderous effort strike the underside of the crossbar after a partial block by the keeper, who was called into action to keep out Di Maria in PSG's next attack.

Mbappe and Rabiot fired wide as Amiens continued to make PSG work hard for victory, with the frustrating wait for a second goal continuing when Marquinhos thumped a header off the crossbar from six yards after Giovani Lo Celso's precise cross.

But they did seal the win with 12 minutes remaining, Rabiot diverting Di Maria's corner in off the post, with VAR confirming the ball comfortably crossed the line.