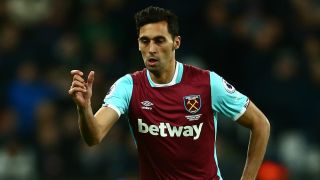 Alvaro Arbeloa, Jonathan Calleri and Gokhan Tore have all left West Ham after unsuccessful stints at the club.

West Ham confirmed the trio's departures on Thursday, with former Real Madrid defender Arbeloa's one-year contract coming to an end after a season in which he only played three Premier League games.

The club are reportedly close to signing Pablo Zabaleta, who is leaving Manchester City, as they go in a different direction at right-back.

Forward Calleri's loan from Deportivo Maldonado ends after he scored once in 16 Premier League appearances, just four of which were starts.

Winger Tore signed from Besiktas for a £2.5million loan fee, but West Ham will not take up their £10m option to sign him permanently after a knee injury ended his season in October, meaning he made only five top-flight outings.