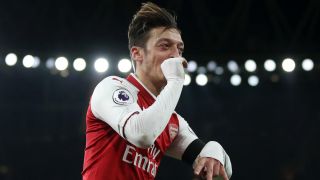 Ozil is out of contract at the end of the season, and the Germany international playmaker is no closer to signing a new deal, tipped to follow Alexis Sanchez out of Emirates Stadium amid reported interest from Jose Mourinho's United.

The 29-year-old worked with Mourinho during the pair's time together at Real Madrid and Wright conceded Ozil would flourish in Manchester.

"I think he's that type of player who will drag a team by its bootlaces through a game, but if your team is playing well, he's going to sprinkle stardust all over the place," Wright told Sky Sports when asked if he thought Ozil would perform better at United.

"With the players he'd be playing with at Man Utd as well, he is unbelievable.

"He is just awesome, and with the right team, and the right movement in front of him, he is easily one of the best I've seen. He's amazing.

"Is this difficult to say? Yeah. And we can't keep arguably two of the best players, arguably in the history of the club, ability-wise. It's sad times."

Ozil, who missed Wednesday's goalless draw against Chelsea in the first leg of the EFL Cup semi-final, has scored four goals and tallied five assists in the Premier League this season.

Since arriving from Madrid in 2013, Ozil has netted 27 goals and recorded 47 assists in 134 league appearances.