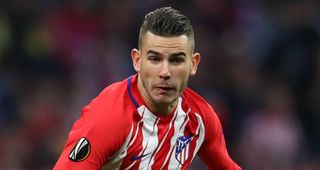 Lucas Hernandez will not leave Atletico Madrid next month but the France international could join Bayern Munich at the end of the season, according to the Spanish club's executive director Miguel Angel Gil Marin.

Lucas' future has been subject to intense speculation in recent weeks after Marca suggested Bayern were ready to trigger his €80million release clause.

The 22-year-old stressed his desire to remain in the Spanish capital, and coach Diego Simeone is keen to keep hold of the defender.

Bayern denied any deal for Lucas was in place but have spoken of their admiration for him, although Gil Marin has no intention of letting him go when the transfer window opens.

He is open to discussing a deal for Lucas, though, should Bayern be keen on taking him to the Bundesliga after the conclusion of the 2018-19 campaign.

"The player cannot leave Atletico Madrid in this winter transfer window," he told Goal and Spox.

"We have a good relationship with Bayern and will meet with them in January to evaluate the situation.

"If the player wants to leave we will talk about it – but only about a transfer in July."