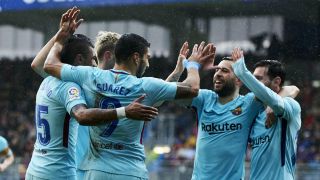 Barcelona equalled a club record with their 2-0 win at Eibar on Saturday.

Back-to-back La Liga draws against Espanyol and Getafe have seen the leaders falter over recent weeks but goals by Luis Suarez and Jordi Alba saw off a robust challenge from Eibar, who had Fabian Orellana sent off midway through the second half.

In a run going back to last season, Barca are now 31 games unbeaten in Spain's top flight – a streak to match the club-best run established by Pep Guardiola's domestic and European champions in 2010-11.

Ernesto Valverde's men can set a new record when they host neighbours Girona next weekend, on the other side of an eagerly anticipated Champions League showdown with Chelsea at Stamford Bridge.

Avoiding defeat in the all-Catalan clash would also equal Real Sociedad's all-time La Liga record of 32 games unbeaten, which dates back to the 1979-80 campaign.