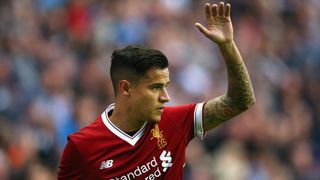 Barcelona are ready to reignite their interest in Liverpool star Philippe Coutinho during the January transfer window, although chief executive Oscar Grau insists the LaLiga leaders must sell to buy.

Coutinho handed in a transfer request at Liverpool, who reportedly rebuffed three bids from Barca during the closing weeks of the window – the last of which was understood to have come in at £119million.

Barca director Albert Soler claimed Liverpool attempted to broker a €200m sale on deadline day, only for the Catalan giants to balk at the price.

Reports this week suggested Soler would step away from footballing duties at Camp Nou and, speaking at a news conference to announce Barcelona's latest financial results, Grau insisted a move for Brazil midfielder Coutinho was still on the agenda.

"We are ready for buying Coutinho in the winter market or any player the technical staff requests," he said.

"But it is important to adjust ourselves, so if there have to be arrivals there must be exits as well."

Neymar's world record departure to Paris Saint-Germain for €222m in August did much to swell the coffers and Grau outlined how Barca benefited from the windfall.

"We must forget about the price paid for Neymar last summer," he added.

"After taxes we received about €188m in income and a direct financial impact on the club's treasury of €144m."