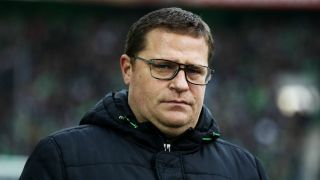 Eberl, who started his playing career at Bayern Munich, is rumoured to be one of the leading contenders for the role after club captain Philipp Lahm confirmed he will not be taking up the position when he retires at the end of the season.

But Bayern chief executive Karl-Heinz Rummenigge insists there have been no talks between the Bundesliga champions and Gladbach over the possible appointment of Eberl.

"We have no contact either with the club or with Max Eberl, there is nothing at all," Rummenigge told Sky Germany after Bayern's 8-0 demolition of Hamburg on Saturday.

"We had an option [Lahm] - which unfortunately has not worked out - and we do not have a Plan B solution in the drawer."

Reports suggested Bayern could pay a seven-figure fee to Gladbach to secure Eberl's services, but Rummenigge laughed off the claims.

"If I came with such an idea to the supervisory board, they would call me crazy," the chief executive said.

"It is known that Max has a contract in Gladbach until 2020. It would be dubious for us to talk about their sporting director in front of Monchengladbach in public, and we will not do so in the future either - because we have a good relationship with Gladbach. Maybe we can get a sporting director who is not under any contract."

Gladbach vice-president Rainer Bonhof previously said the club will fight to keep Eberl, while the sporting director himself told Sky Germany: "There is no offer, I have a contract and I feel incredibly good."