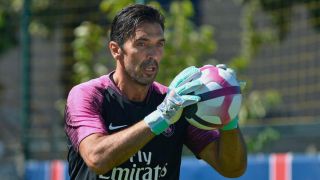 Gianluigi Buffon conceded a penalty as a forgettable first appearance for Paris Saint-Germain ended in a 4-2 loss to third-tier Chambly on Sunday.

The 40-year-old goalkeeper, signed on a free from Juventus, played the first 45 minutes in the behind-closed-doors friendly.

His debut began on a difficult note, giving away an early penalty which set Chambly on their way to a two-goal half-time lead.

Teenagers Colin Dagba and Virgiliu Postolachi netted after half-time to provide the Ligue 1 champions with a measure of optimism, although their goals failed to spare head coach Thomas Tuchel from his first defeat at the helm.

Buffon's next assignment with his new club is a more glamorous International Champions Cup clash with Bayern Munich in Austria on Saturday.