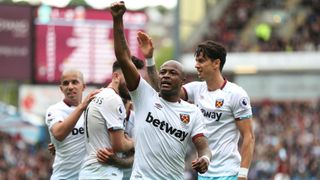 Andre Ayew scored the winner as West Ham came from a goal down to beat Burnley 2-1 and end a disappointing Premier League season on a positive note.

Sofiane Feghouli's fine goal cancelled out the opener from Sam Vokes for Slaven Bilic's side, before Ayew nodded in the decider 18 minutes from time.

Burnley, who had only lost five games at Turf Moor in the top flight all season before Sunday, end a largely strong season in 16th place, five points behind the Hammers.

Clear-cut chances were scarce in a match in which there was little but pride to play for, but Ayew benefited when the ball bounced off the crossbar from a Tom Heaton save and allowed him to nod in the winner.

The win was greeted warmly by the travelling supporters, but Bilic's long-term future will likely remain uncertain as the planning for next term starts to begin in earnest.

Burnley started the better side and should have broken the deadlock after 12 minutes when James Tarkowski nodded over from point-blank range after Andre Gray kept a corner alive.

Vokes provided a more clinical touch to give the home side a deserved lead with 23 minutes played. Gray fired in a low cross from the right and, after Scott Arfield completely missed the ball, the Wales international had a simple task of stroking it into the bottom-right corner.

West Ham had barely threatened but produced the finest moment of the half to level four minutes later, Feghouli rifling low past Heaton after Ayew backheeled the ball into his path in a fine passing move.

Ashley Westwood was extremely fortunate not to be sent off moments later, the midfielder escaping a second yellow card after planting his studs on the knee of James Collins, before Gray missed a good chance to regain Burnley's lead before the break as he flicked Stephen Ward's cross wide.

Neither side appeared overly concerned with pushing for a winner, but West Ham got a slice of luck to give them the lead in the 72nd minute. Heaton made a flying stop to keep out Edimilson Fernandes' rocket, but the ball dropped onto the crossbar and bounced straight onto the head of Ayew, who nodded in his sixth goal of the season.

Manuel Lanzini whipped a free-kick inches over the bar in the closing stages as West Ham finished on the front foot, though there was to be no third goal in what was only their 12th league win of the season.