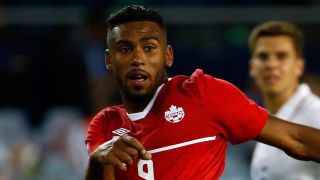 Canada gained a measure of revenge against Jamaica, recording a 2-0 win in their friendly on Saturday.

But there was a downside for the hosts, with 16-year-old sensation Alphonso Davies sent off late in the encounter.

The outing was Canada's first since a loss to Jamaica in their CONCACAF Gold Cup quarter-final in July, but both nations were understrength for the clash.

Canada took the lead in the 16th minute, with Junior Hoilett allowed to run into the area from the right before crossing for Jackson-Hamel to tap in his third international goal.

Jackson-Hamel opens the scoring for , tapping in the cross from Hoilett September 2, 2017

It was 2-0 on the half-hour mark as Jackson-Hamel's nice touch put Osorio through and the Toronto midfielder made no mistake with his finish.

Osorio slides the ball home, after a beautiful touch by Jackson-Hamel, doubling the lead September 2, 2017

Canada goalkeeper Jayson Leutwiler was forced into a couple of good saves to maintain his clean sheet, while substitute Davies saw red late on.