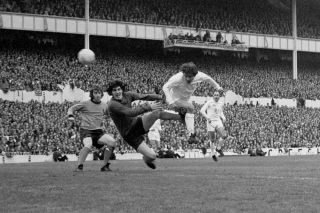 When Chelsea face Arsenal in Baku on Wednesday it will be only the third time there has been an all-English tie in the combined history of the UEFA Cup and Europa League.

With fewer teams qualifying in the first place and some of those that do perhaps not treating Europe’s secondary competition as a priority, few English teams make it to the later stages where they might be drawn together, leaving this year’s final as something of a rarity.

But though the history is brief it is pretty rich all the same given the calibre of the two that have come before.

The first all-English affair came in the 1972 UEFA Cup final, which pitted the previous season’s League Cup winners Spurs against a Wolves side who had finished fourth in Division One. This was the first season of the UEFA Cup, newly created to replace the old Inter-Cities Fairs Cup. Spurs won the first leg 2-1 after Martin Chivers struck a stunning late winner at Molineux, having seen his 57th-minute opener cancelled out by Wolves skipper Jim McCalliog.

Come the second leg at White Hart Lane, Spurs captain Alan Mullery added to their advantage with a 29th-minute goal and though Dave Wagstaffe pulled a goal back before the break Wolves could not draw level. It was Tottenham’s second European honour after lifting the UEFA Cup Winners’ Cup in 1963 with a rout of Atletico Madrid, and they would win the UEFA Cup again in 1984, beating Anderlecht on penalties.

Louis van Gaal’s Manchester United dropped in to the Europa League midway through the 2015-16 season after finishing third in their Champions League group. They comfortably saw off FC Midtjylland in the last 32 before being paired with a Liverpool side finding their identity in Jurgen Klopp’s first season in charge. It might not be the stage these two great rivals were used to meeting on but the Europa League proved a fine setting.

Anfield was absolutely buzzing for the first leg and Liverpool rewarded their fans with a comfortable 2-0 victory, with Daniel Sturridge scoring from the spot after Memphis Depay fouled Nathaniel Clyne and Roberto Firmino added a second from close range with 17 minutes to go. Only a fine display from David De Gea prevented things getting worse for a disappointing United side. In the second leg at Old Trafford, Anthony Martial scored in the 32nd minute to give United hope, but a brilliant solo goal from Philippe Coutinho on the stroke of half-time killed the tie. While United were out, Liverpool continued to the final where they eventually lost 3-1 to Unai Emery’s Sevilla.