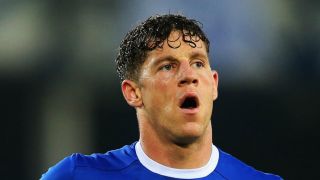 Chelsea have announced the signing of Ross Barkley from Everton, the playmaker joining the Premier League champions for a reported £15million.

Barkley has yet to play this season due to a hamstring injury and had been widely expected to leave Goodison Park, with Sam Allardyce resigned to losing the Englishman.

Chelsea were close to completing a deal for Barkley on transfer deadline day in August, with the player reportedly changing his mind about a £35m move during a medical, although the 24-year-old strenuously denied these claims.

Barkley said he would delay a decision over his future until the January transfer window, when he would be fully fit, with his Toffees deal set to expire at the end of the season.

But the Blues have now got their man, with Barkley signing a five-and-a-half-year contract to wrap up his switch to Stamford Bridge.

Speaking about his move, Barkley told the club's official website: "I'm overwhelmed, I'm looking forward to it and I'm really excited to get started.

"To be given a fresh start at a new club like Chelsea, it's unbelievable for me.

"I'm looking forward to continuing where I left off at the end of last season and hoping to improve and add more goals to my game."