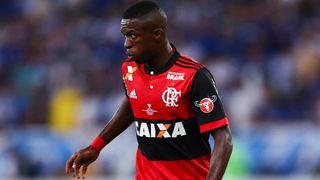 Real Madrid-bound Vinicius Junior scored a brace to help Flamengo to victory in the Copa Libertadores, while Atletico Nacional enjoyed a big win.

Vinicius, the 17-year-old forward who has already been signed by Madrid, came off the bench to see Flamengo overcome Emelec 2-1 in Group 4 Wednesday.

The Brazilian came on with his team 1-0 down in Guayaquil, where Brayan Angulo had put the hosts ahead with a deflected strike in the 65th minute.

But Vinicius took over from there, beating three markers down the right before cutting inside and finishing to make it 1-1.

He scored the winner in the 85th minute, playing a one-two with former Wolfsburg and Werder Bremen star Diego before curling a finish into the corner from just inside the area.

Dayro Moreno struck from the penalty spot before the visitors' task was made even harder as Luis Luna was sent off five minutes prior to half-time.

Atletico made the most of their numerical advantage early in the second half as Reinaldo Lenis scored twice and Macnelly Torres also netted.

The Colombian giants top Group 2 on six points ahead of Bolivar, who drew 1-1 at home to Colo-Colo.