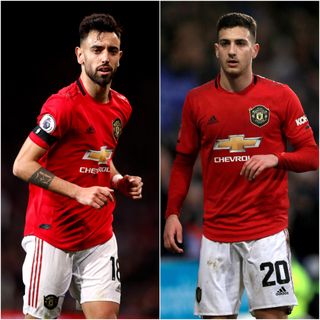 Diogo Dalot is confident compatriot Bruno Fernandes will not only handle the pressure at Manchester United but flourish.

A long-running transfer saga and protracted negotiations with Sporting Lisbon finally bore fruit on Thursday as the 25-year-old completed his switch to Old Trafford.

Fernandes arrived to much fanfare and a fee that could reach 80million euros (£67.2million), but the midfielder comfortably dealt with the pressure in a promising debut against Wolves.

The 25-year-old was United’s biggest threat in Saturday’s 0-0 draw and Dalot, who came so close to snatching victory at the death, believes the Portugal international will flourish at Old Trafford.

“The players knew Bruno was a very good player of course,” the full-back said.

“It’s different seeing him abroad and then seeing him in training every day. He’s going to bring us a lot.

Asked if Fernandes can cope with the pressure that comes with expectation, Dalot said: “Yeah, he’s an experienced player. He played abroad a lot of years and you knew he could come here and do a great job.

“For me, it was not a surprise and I think that he is going to show us a lot more that he did today but it was a fantastic debut for him.”

While Fernandes was a well-known name, Dalot fielded plenty of questions from team-mates about his compatriot, who he has taken the lead in helping to settle into life at United.

“I had Portuguese coaches and staff when I came,” the right-back said, having been brought in by Jose Mourinho in 2018.

“They helped me a lot and when he came I try to do the same because he had a Portuguese guy, a player that he knew.

“I’m just trying to help him settle in with the whole team.”

The winter break should speed up Fernandes’ acclimatisation to life at United, who do not return to action until February 17.

“It’s going to be a good training camp for us to work hard,” Dalot said of the trip to Spain.

“Now the players have a few days to rest and that’s important as well, to be with our families again and then be ready to go again.

“More than ever for the lads that have been played week after week, game after game.

“I think it’s good for them to have a break and then come again for the second part of the season.”

➡️ #MUFC will return to action on 17 February with a visit to Chelsea, after the first-ever #PL winter break. pic.twitter.com/hRPd8rxviV— Manchester United (@ManUtd) February 2, 2020

Dalot is confident of making that part of the campaign a success, having made just seven appearances in all competitions during an injury-hit season.

“It feels good to start feeling confident again and feeling comfortable with my fitness,” the 20-year-old said.

“I’m going to push hard and make sure that I deserve to play here. That’s why I signed to come here. I want to be the best right-back that I can be at Manchester United.

“The (injuries) are experiences that I need to live. It’s football and you need to be ready for this kind of challenge.

“Of course I was young when all this happened but in my mind I am always trying to be positive and in the future I’ll be strong, physically and mentally.

“I’m going to fight the same as I fought when Ash (Young) was here.

“I’m going to fight to play. I think I have the ability to play at right-back at this club and I need to show that.”