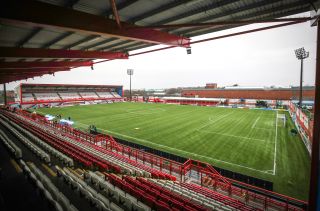 David Moyo has signed a two-year contract extension with Hamilton that will keep him at the club until at least 2023.

The 25-year-old striker joined Accies over a year ago from non-league side St Albans and scored winning goals against Motherwell and Rangers.

Speaking to AcciesTV, Moyo looked forward to opening his account for the season against Ross County on Saturday: “I enjoy playing my football here and I’m really happy to have extended my contract.

“It’s security and I know I can play my football here.

“It’s a massive game for us, it’s always a tough one against Ross County,
but we need the three points and if we do the right things I don’t see why we can’t do that.”

Head coach Brian Rice said: “I’m delighted to get David tied up, he deserves it. He’s a good character and his work ethic is fantastic.

“He’s scored a couple of important goals for us last season, he’s a fans’ favourite.

“It’s a reward for his hard work but he needs to keep that going and maintain that.

“I think there is a lot more to come from the lad.”