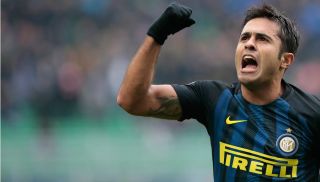 The 31-year-old had moved to San Siro in 2016 after a fruitful spell with Sampdoria, but managed only 14 goals in 86 appearances for the Nerazzurri.

Jiangsu are owned by Suning, the same organisation that is now a majority shareholder in Inter.

Jiangsu finished 12th in last year's Chinese Super League, but have improved to fourth in the current campaign.

Best of luck with your new adventure at Jiangsu Suning !July 13, 2018