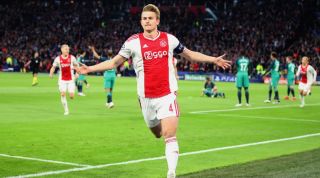 The centre-back was one of the stars of the Dutch club’s remarkable run to the Champions League semi-finals, which ended in dramatic circumstances on Wednesday.

Ajax led 2-0 on the night, with De Ligt scoring the opener, and 3-0 on aggregate in Amsterdam – before Tottenham launched an extraordinary second-half comeback to win 3-2 in the final minute of stoppage time thanks to Lucas Moura’s hat-trick and go through on away goals.

De Ligt has frequently been linked with the likes of Barcelona, Manchester United, Manchester City, Liverpool and Juventus throughout the campaign.

Former United goalkeeper Van der Sar, now working as an Ajax director, revealed what he thinks is next for the 19-year-old.

“I think these will be De Ligt's final games with Ajax, but I hope he goes out on a high," he told Sky Sport Italia.

"He's been here since he was a child and will end up at a big club.

“I think he'll go to England or Spain."