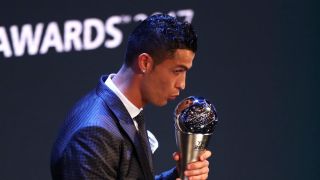 Cristiano Ronaldo believes his rivalry with Lionel Messi has plenty of distance left to run after scooping the Best FIFA Men's Player award in London.

Real Madrid superstar Ronaldo was honoured at the gala after a poll of international head coaches, captains and members of the media saw him come out ahead of Barcelona counterpart Messi, with Brazil and PSG forward Neymar in third.

Including the years when FIFA's individual award was merged with the Ballon d'Or, Ronaldo and Messi have now been labelled the best player in the world by football's global governing body five times apiece.

The Portugal captain has come out on top in four of the past five years, with Messi in second place on each occasion.

Yet Messi has been in a rich vein of form for club and country over recent months, firing Barca to the top of LaLiga with 11 goals in nine matches and securing Argentina's place at the 2018 World Cup with a majestic hat-trick against Ecuador.

As the all-time leading scorers for their respective clubs and countries and the two leaders in both LaLiga and Champions League history, debate over who is superior out of Messi and Ronaldo will occupy football fans for some time to come.

Amazing feeling to have won this award again. Want to dedicate to my family, my friends, my teammates and coaches from both Real Madrid and Portuguese NT and everyone who supported me. October 23, 2017

Speaking to reporters at London Palladium, Ronaldo initially sought to play down the rivalry before apparently laying down a long-term challenge to the 30-year-old Messi, whom he swapped cordial greetings with as they sat alongside each other during the ceremony.

"I don't compete with Leo," he said. "He is a player, who is in the same era. He won five times. I won five times too - individual awards for the best in the world. So things are as they are.

"Obviously, I am happy because, as I said before, I am at the best club in the world. I have had the opportunity to demonstrate that I am at a very high level during the last few years. And I am still [physically] very well.

"So I am very quiet. I will see what's going to happen tomorrow, but at the moment I have to enjoy this nice moment of my life because you never know what will happen next."

But, asked whether Ronaldo versus Messi was over, the 32-year-old added: "It didn't finish yet... it is just starting."

Reigning Spanish and European champions Madrid are currently five points behind LaLiga leaders Barcelona, who they host in the first Clasico of the season on December 23.