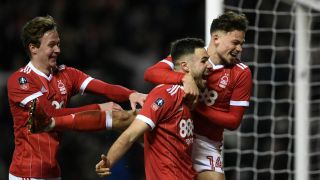 The FA Cup third round saw another two big shocks as holders Arsenal lost at Nottingham Forest, while League Two side Newport County came from behind to knock out Championship promotion hopefuls Leeds United.

Arsenal have won the tournament in three of the last four years, but were dumped out in a thrilling 4-2 defeat at the City Ground against managerless Forest, with two penalties helping the second-tier hosts through.

Newport's victory was their first in the competition against a team from England's second tier or higher since 1979 and came just 24 hours after Coventry City stunned Stoke City by the same scoreline, prompting the sacking of Mark Hughes.

League One Shrewsbury Town gave David Moyes a headache after holding West Ham United to a 0-0 draw to force a replay in London, while Tottenham were frustrated by AFC Wimbledon until Harry Kane inspired a surge to victory during the final 25 minutes.

Arsene Wenger was powerless, watching on from the stands as he served the first game of a three-match touchline ban as his Arsenal side exited the FA Cup at the first hurdle - their first third-round exit under his leadership.

Forest finished the game with 10 men after Joe Worrall saw red for a terrible tackle on Chuba Akpom, but the depleted hosts held on to give caretaker boss Gary Brazil a famous scalp.

Lichaj had headed in Dowell's free-kick to open the scoring but the Forest lead lasted just three minutes before Per Mertesacker finished after a goalmouth scramble.

Shortly before half-time Lichaj scored the goal of the game, the full-back's sumptuous volley ensuring he scored a double for the first time in English football.

Wenger is the FA Cup's most successful manager with seven titles, but the holders will not be in the draw for the fourth round after Dowell scored a second Forest penalty despite slipping as he stepped up from 12 yards.

4 - Nottingham Forest are the first team from a lower division to score 4+ goals against Arsenal in an tie since Hull City in January 1908. Thrashed.January 7, 2018

It looked as though Leeds were well on course for the fourth round when Gaetano Berardi fired home via a deflection after only nine minutes in south Wales.

That was as good as it got for the visitors, though, who eventually succumbed to building Newport pressure when Conor Shaughnessy turned Frank Nouble's low cross into his own net 14 minutes from time.

West Ham were then held to a goalless draw by Shrewsbury in a game short on quality.

Joe Hart captained the Hammers on his return to his old club as David Moyes rested a number of first-team regulars, but they were second best for the most part as the League One high-flyers earned a replay later this month.

The extra game will not be welcomed by Moyes, though, as he attempts to steer West Ham away from the Premier League relegation zone.

Tottenham made hard work of League One opponents AFC Wimbledon but eventually reached the next round with a 3-0 win.

Goalkeeper Michel Vorm had to make some fine saves to stop the visitors taking the lead at Wembley before Harry Kane scored twice in two second-half minutes to put Spurs firmly in control.

Jan Vertonghen capped the win with his first goal for the club since October 2013, as Mauricio Pochettino's side sealed their place in Monday's draw.

1536 - Jan Vertonghen has scored his first competitive goal for Tottenham in 1536 days, since scoring against Sheriff Tiraspol in October 2013. Wait.January 7, 2018