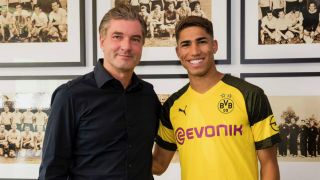 Borussia Dortmund's busy pre-season transfer activity has continued with the capture of Achraf Hakimi from Real Madrid on a two-year loan deal.

The highly rated right-back will remain at Signal Iduna Park until the end of the 2019-2020 season.

Carvajal himself made a similar move to Bayer Leverkusen in 2012, spending one season in Germany before Madrid exercised their buy-back option.

"Achraf Hakimi is a young, very dynamic full-back, who has played for Real Madrid and the Moroccan national team at the highest level," said Dortmund sporting director Michael Zorc.

The 19-year-old, who has won 13 international caps, appeared in all three group matches for Morocco at the 2018 World Cup.

He joins the likes of Thomas Delaney and Abdou Diallo as new arrivals at Dortmund, who earlier on Wednesday confirmed the sale of winger Andriy Yarmolenko to West Ham.