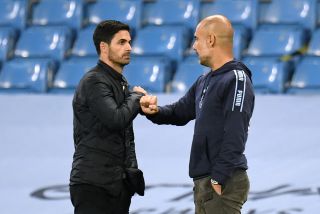 Holders Manchester City will continue the defence of their FA Cup crown in the semi-final against Arsenal on Saturday, July 18 at Wembley.

The game, which pits Pep Guardiola against his former assistant manager Mikel Arteta, will be aired on BT Sport and kicks off at 7.45pm.

Manchester United and Chelsea will play at 6pm the following day, a match which will be televised live on BBC One.

City booked another Wembley date by beating Newcastle at the weekend while the Gunners won away at Sheffield United.

United needed extra time to see off Norwich to book their last-four date and Chelsea were winners at Leicester.