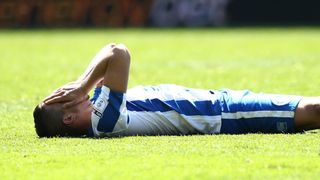 Brighton and Hove Albion manager Chris Hughton is "very hopeful" Anthony Knockaert will recover from an ankle injury in time for the new Premier League season.

Knockaert was a star performer for Brighton as they won promotion from the Championship last season, scoring 15 goals and contributing eight assists from the wing.

But the 25-year-old managed only 10 minutes of Brighton's opening pre-season friendly on Friday, a 2-0 win against Fortuna Dusseldorf, before limping off with ankle ligament damage.

"When he did it, you always think the worst and he has got a ligament injury but it's slight which is good," Hughton told reporters.

"We're very hopeful he'll make the season. The good thing is he's got the tough two-and-a-half weeks of training under his belt.

"At the moment, we're looking at a three-week period for him. We'll assess it over this period, it will either be very good news or it will take a little bit longer."

BREAKING: have completed the signing of Mathias Normann from FK Bodo/Glimt. More at .July 20, 2017

Brighton, who start their first Premier League season at home to Manchester City on August 12, have also announced the signing of midfielder Mathias Normann on a three-year deal from Norwegian second division side FK Bodo/Glimt.