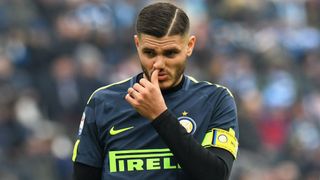 Mauro Icardi will miss Inter's match at home to Crotone on Saturday through injury but new recruit Rafinha can expect to at least "play a part", according to coach Luciano Spalletti.

Icardi has been a standout performer in Serie A this season and looks well on track to beat his personal best of 24 league goals in a single campaign, having already got 18 in 22 games.

But the Argentinian will have to sit out the visit of struggling Crotone to San Siro due to a muscle issue.

Bayern Munich loanee Rafinha faces no such problems, however, and the Brazilian will feature in some capacity, having made his debut against SPAL with a one-minute cameo off the bench.

"Icardi is not available," Spalletti told reporters at his pre-match news conference.

| : "Usually we have up front, but tomorrow there will be times when we won't know who'll be in the box to finish. There will probably be about two or three players who we wouldn't expect." February 2, 2018

"He would like to play, even from home, but this is not possible. He has a muscle problem and we thought it was best not to risk him.

"[Belgian youngster Xian] Emmers will be called up. As for what this will change, we will be missing a Capocannoniere, but Eder will take his place," he added, referring to Icardi's status as a challenger for the title of Serie A's top scorer this season.

"He [Eder] can create spaces and link up well with the midfield. Tomorrow [Saturday] there will be times when we won't know who'll be in the box to finish. There will probably be about two or three players who we wouldn't expect.

"We must demonstrate the many qualities that we have here and look at those which have permitted us to be coaches and players at Inter.

"We must move past this current spell and get back to our best. Rafinha will definitely play a part in the match. Rafinha is a top quality player."