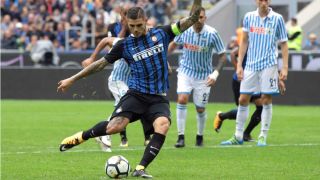 Inter continued their winning start under Luciano Spalletti as Mauro Icardi's VAR-awarded penalty and a late stunner from Ivan Perisic secured a 2-0 home victory against Serie A newcomers SPAL.

Referee Claudio Gavillucci gave a free-kick when Joao Mario was scythed down midway through the first half, but after utilising the newly introduced video review system, the official came to the correct decision and, five minutes after the initial foul, Icardi's fifth Serie A goal of the season put Inter ahead.

Facing the San Siro outfit in the top flight for the first time since 1968, SPAL refused to roll over, with Alberto Paloschi and Bartosz Salamon squandering brilliant chances either side of the interval.

Alfred Gomis was in fine form to keep SPAL in the game, while Milan Skriniar's outstanding effort struck the crossbar.

It represents a third successive top-flight victory for new Inter boss Spalletti, as his side look to challenge the domestic dominance of Juventus.

In-form Inter wasted no time in asserting their authority, with Roberto Gagliardini's rasping drive just inches away from putting the hosts ahead inside five minutes.

SPAL were quick to respond as Paloschi's volley deflected wide off Miranda, but it was Inter who continued to dominate, and Spalletti's side finally made the breakthrough after 27 minutes.

It came courtesy of the VAR system, as after initially awarding Inter a free-kick following a foul on Joao Mario just inside SPAL's area, referee Gavillucci amended his decision and pointed to the spot – Icardi stepping up to send Gomis the wrong way.

Inter did not let up, with Gomis forced into a succession of superb stops to keep out stinging efforts from Icardi and Antonio Candreva.

SPAL should have drawn level in first-half stoppage time, but Paloschi sliced wide from close range when one-on-one with Samir Handanovic.

Inter continued to look suspect at the back, with Paloschi just inches away from tucking home Marco Borriello's downward header shortly after the restart.

The visitors remained a threat and Salamon should have levelled when he connected with Federico Viviani's excellent free-kick, but the defender's header skipped wide.

Skriniar looked set to wrap up the victory with an audacious long-range strike with 15 minutes remaining, only for the bar to come to SPAL's rescue.

Icardi almost doubled his and Inter's tally late on, heading straight at Gomis, but Perisic made no mistake three minutes from the end, hammering home an emphatic volley to condemn SPAL to their first defeat of the campaign.