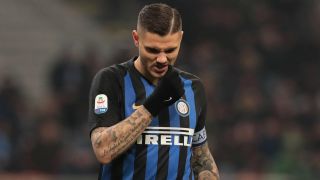 Mauro Icardi was stripped of the Inter captaincy "for the good of the club" but the Serie A outfit hope to keep him at San Siro, according to sporting director Piero Ausilio.

The Nerazzurri confirmed on Wednesday that Samir Handanovic had taken the armband from striker Icardi, who was then left out of the squad for the first leg of their Europa League last-32 tie against Rapid Vienna.

Head coach Luciano Spalletti said the Argentina international had withdrawn from the travelling group himself, and the player appeared to confirm as much when he suggested on Instagram that he is receiving treatment for an injury.

Speculation over Icardi's future has increased, with Wanda Nara, his wife and agent, reported to have angered some inside the club by suggesting he is not protected enough from negative news.

Ausilio insists the decision to change captain had nothing to do with discussions over a possible new contract, but he insists it was the right call for Icardi and the rest of the squad.

"A decision was made that everyone agreed with, and it was a painful one to make," he told Sky Sport. "The reasons are serious and valid; there's nothing to explain.

Stripped of the captaincy

"Mauro remains important to us. He still has a lot to give to Inter. We are not questioning him as a professional or as a striker, which is why I hope he stays with us for a long time yet. 'Us' is the key word here and must always prevail for the good of the club and the changing room.

"We have taken measures – and it's the last thing we would have wanted to do – after letting something slide in the past. It might seem like a step backwards, but in terms of the future it's 10 steps forward.

"We'll speak with Icardi, although it's not right to speak of talks to clear the air because he's never been put in discussion and he's a great player. If he likes, we'll set conditions to follow. Contract discussions have in no way been affected by these events – it's a totally different subject."

Inter claimed a 1-0 win against Rapid in Icardi's absence, with Lautaro Martinez scoring the winning goal for the second game in a row, converting a first-half penalty after being fouled by Manuel Thurnwald.

The forward now hopes for more regular opportunities to impress from the start, having come off the bench to secure the 1-0 Serie A win at Parma last Saturday.

"I'm happy to have scored again," he told InterTV. "We got the win on a difficult pitch. I'm happy to go back to Italy with a positive result.

"It's really important to have continuity: against Parma, I started on the bench, and today I was in the first team.

"I'm ready to do everything the coach asks for the good of the team. Now, we head to Samp [Sampdoria], our next game in front of our fans, and then we think about the return against Rapid."