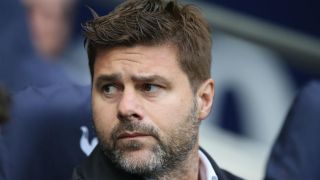 Mauricio Pochettino praised Tottenham for picking up three crucial Champions League points from what he described as a "must-win" game against APOEL.

In-form striker Harry Kane scored a hat-trick - his sixth treble in 2017 - as the Premier League club made it two wins from two in Group H.

However, while the final score may suggest it was straightforward, Pochettino's patched-up side - minus the suspended Dele Alli and Jan Vertonghen, as well as Christian Eriksen due to illness - survived several close shaves on Cypriot soil.

Igor de Camargo hit the bar when the game was still scoreless, while Hugo Lloris nearly gifted APOEL the opening goal when he cannoned a clearance straight off team-mate Davinson Sanchez.

“It was a tough game. It was a difficult game, they were very motivated,” a delighted Pochettino told BT Sport.

“I think it’s important today to get the three points. It was a must-win game and it’s so important.

"Today there were some good performances from players who have not been playing regularly.

“Of course, the hat-trick for Harry was a fantastic performance. Today was a difficult night so it was important to win."