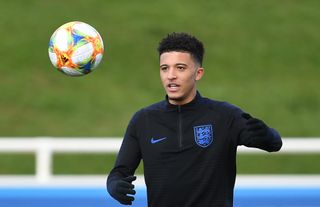 Jadon Sancho is putting all the background noise about his future to one side as the teenage star looks to bring success to Borussia Dortmund and England.

The 19-year-old has established himself as one of the most exciting attacking talents in the world since taking the bold decision to leave Manchester City for the Bundesliga in 2017.

Sancho has flourished at Dortmund and naturally been subject to widespread speculation about his future, with Manchester United strongly linked with a big-money move for the England international.

Such talk would be a distraction for some, but the teenager’s focus is squarely on making this a memorable season for club and country.

“I don’t really try to take notice of all the media,” Sancho said. “I just try to stay focused on my game.

“Obviously being in Germany has taken off the pressure of the media and I think that’s really helping me a lot and keeping me focused.”

Sancho is determined to help Dortmund lift the Bundesliga crown this term, before helping England build on their World Cup semi-final display at Euro 2020.

The teenager can underline his star status in a tournament that ends at Wembley and the Londoner would be open to a return to home shores one day.

Sancho certainly has the ability to light up the best leagues in the world. After last month becoming the youngest player to ever score 15 goals in the German top-flight, he joins up with England having scored two and provided three more this season.

“I am just happy that I’m playing and that’s the main thing,” Sancho said. “I’m just helping my team and learning every day when I’m on the pitch.

“It’s a great start. I am just happy to have two goals and three assists. Hopefully I’ll just carry on.”

Given Sancho’s confidence on the field and experience at the top, it is easy to forget that he does not turn 20 until next March.

The attacker already has six caps under his belt for the England senior team and is reaping the benefit of his coaches’ belief in young talent.

“It really helps you if you play week in, week out because you adapt to how you play. I feel that the coaches are believing in English players a lot more.

“My move to Germany has given the option to managers, to see that there is talent there and that they can give opportunities.

“There are a lot of good players coming up and hopefully we’ll win major things with England. I just hope everyone gets their opportunity.”

Uncapped youngsters Aaron Wan-Bissaka, Mason Mount and James Maddison have been brought into Southgate’s ever-evolving group for the Euro 2020 home qualifiers against Bulgaria and Kosovo.

There was a real buzz around the camp as they met up for this month’s double-header, with the group’s lack of experience made up for by its talent and hunger.

Jordan Henderson and Raheem Sterling are the most-capped players with 51 apiece and the latter, still only 24, has been a big help to Sancho.

“He gives me a lot of advice and I’m really grateful. Obviously he came into England at a young age as well, so he just told me his experience in the past and just told me ‘don’t fear anyone and be yourself’.”