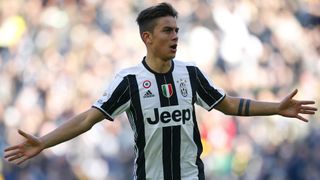 Paulo Dybala and Gonzalo Higuain struck as Juventus got their Serie A title bid back on track with a comfortable 2-0 victory over Lazio in Turin.

Leaders Juve increased their advantage over Roma – who face Cagliari later on Sunday – to four points as they made an impressive response to their loss away to Fiorentina last time out.

Dybala put Massimiliano Allegri's men in front within five minutes, his third goal in four games across all competitions.

Higuain quickly doubled the advantage, striking for the 12th time in his Serie A career against Lazio, his favourite top-flight opponents.

And the hosts controlled proceedings from then on, Dybala missing second-half chances to add to the lead with Simone Inzaghi's men never threatening a comeback.

Fourth-placed Lazio had won five of their last six games coming into the match, but are used to struggling against Juve, who they have not beaten in 25 league attempts.

Juve switched to a new 4-2-3-1 formation for the match and made a magnificent start. Stephan Lichtsteiner and Mario Mandzukic – in as two of Juve's four changes – combined, before the Croatia striker's headed pass set up Dybala to lash in a left-footed strike from just outside the area.

It was two for the champions after 16 minutes, Juan Cuadrado curling in a cross from the right and the onrushing Higuain stabbing in a low finish for his 14th league goal of the season.

Lazio threatened for the first time when Sergej Milinkovic-Savic struck narrowly wide from 25 yards, but Higuain had the ball in the net again just before the half-hour mark at the other end, only to rage at the assistant for flagging him offside as he headed in Dybala's free-kick.

Gianluigi Buffon was called into action for the first time with simple saves from Stefan Radu and Felipe Anderson early in the second half, while Dybala squandered a good chance to put the match beyond doubt for Juve, firing wide after Cuadrado created the opportunity.

Dybala was visibly frustrated after wasting an even better chance in Juve's next attack of note, failing to hit the target after Higuain's throughball had left him one-on-one with Federico Marchetti.

Lazio, meanwhile, were unable to test Buffon at all in the closing stages, with Juve substitute Marko Pjaca wasting two good late chances at the other end as his side saw out a low-key second half with surprising ease.

- Juventus have won 27 Serie A home games in a row, a Serie A record, and have kept 18 clean sheets in these games.
- Paulo Dybala has scored four goals in his last four Serie A home games.
- Juventus have scored nine goals in the first 15 minutes of play in this Serie A, more than any other team.
- Higuain has now scored in five league games in a row (seven goals) – the last Juventus player to reach this target was David Trezeguet in 2005.