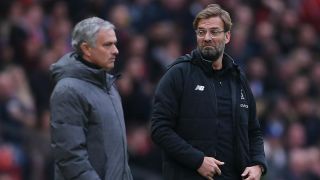 The Premier League rivals meet in a much-anticipated International Champions Cup clash at the 107,000-seater Michigan Stadium on Saturday.

Mourinho added spice to the occasion when he claimed Liverpool's increased level of investment must be justified by success.

The Reds have splashed the cash throughout July with marquee deals for Alisson, Fabinho, Naby Keita and Xherdan Shaqiri.

Klopp acknowledged the Merseysiders have a duty to deliver, but only to satisfy their own supporters.

"Jose can say what he wants to say, to be honest. That's how it is. Obviously I can do the same but I'm not much interested in Manchester United," Klopp told reporters.

"I'm pretty sure they will do business as well in the next few days.

"Apart from that we know our about our responsibility – but we only feel responsible for our fans, for our owners, for our supporters all over the world. Nobody else apart from that.

"That's the situation. We're ambitious, we've never said something different. We know we have to deliver, we know that. What that means at the moment I don't know exactly.

"I think a big part of being at the top is to play football that our people like. That happened last year and probably the year before as well.

"Now we are in a situation where we want to make the next step. We know life is not easier because we brought a few players in. We only feel a little bit better prepared again than last year. That's it."

Klopp expects to be without Keita for the United encounter as the midfielder battles a stiff neck, although Switzerland star Shaqiri could make his first appearance since signing from Stoke City.

Full-back Nathaniel Clyne has flown back to England to be with his partner and newborn son.