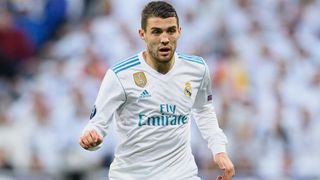 Real Madrid midfielder Mateo Kovacic offered no guarantees over his future with the European champions, but said he would be playing more next season.

The Croatia international has been linked with moves to the likes of Manchester United, Juventus and Tottenham.

"I believe I'll play more, whether in Real or somewhere else," he told reporters on Friday.

"Now is the time for me to play.

"Offers? I am under contract with Real and I wish not to comment on other clubs."

Kovacic arrived at Madrid in 2015 after two and a half seasons with Serie A giants Inter.

He has won three Champions League titles and a LaLiga crown at Madrid, who are searching for a new head coach after Zinedine Zidane's shock departure.

Kovacic admitted the Frenchman's exit came as a surprise, but he praised the 45-year-old.

"His resignation surprised us, we didn't see it coming, but it was his choice," he said.

"He went as a gentleman as a player, now again as a coach. Maybe someone in the locker room knew about it but I didn't. It was a shock.

"Now we wish him all the luck and now let's see if he can achieve this with someone else."