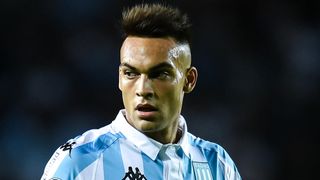 A move to Europe has long been mooted for Martinez and his arrival was confirmed by Inter on Wednesday.

The 20-year-old scored 13 goals in 21 appearances for Racing in Argentina's Primera Division this season, earning his international debut for La Albiceleste as a substitute in the 6-1 friendly loss to Spain in March.

A statement on Inter's official website said: "Lautaro Martinez is officially an Inter player. The Argentine forward has signed a contract with the club that runs until 30 June 2023."

Official: !The Argentine has signed a five-year contractJuly 4, 2018

As expected, Martinez missed out on a place in Jorge Sampaoli's squad for the World Cup finals in Russia.

But the exciting young forward can look forward to life in Italy's top flight next term after finalising his widely anticipated move to Inter, who secured a return to the Champions League by finishing fourth in Luciano Spalletti's first campaign in charge.

Atletico Madrid had been considered the frontrunners to secure Martinez's services, but the LaLiga side incurred the wrath of Racing after allegedly subjecting the player to an unauthorised medical last year.

The statement on Inter's website concluded: "After being monitored by various European clubs in the past months, El Toro is now ready for a new adventure with Inter. Welcome to the Nerazzurri Lautaro!"