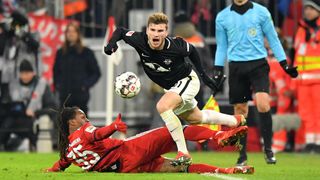 Timo Werner made no attempt to hide his interest in a transfer to Bayern Munich after the Bavarian giants beat RB Leipzig 1-0 on Wednesday.

The Germany international's contract expires in June 2020 and Leipzig could sell him at the end of the season to avoid losing him on a free transfer.

It was reported by German publication Bild on Wednesday that Bayern were leading the race to sign Werner, despite not being keen on a move in the previous close-season.

The 22-year-old acknowledged that if he wishes to stay in his home country then Bayern are the only club that would represent a step up.

"I have no time pressure. I can think about it in peace and decide in the new year," Werner told Sky after Franck Ribery's 83rd-minute winner sent Bayern five points clear of Leipzig in third.

"If you play at RB Leipzig and want to stay in Germany, there is really only one club where you can switch to.

"Of course, staying in Leipzig is also an option, but it's out of the question that other teams are in the race as well."

Bayern coach Niko Kovac expressed his admiration of Werner in his pre-match news conference on Tuesday but was unwilling to go into detail on a potential move for the striker.

"Timo Werner is a fantastic player, but you know that as well as I do. He is a German international and he has developed well since leaving Stuttgart," said Kovac.

"He became a big player, not only in his team but also in the Bundesliga, with great skills.

"What happens in the winter or in the summer isn't that interesting right now, because we have our own players, who still want to achieve something."

The match at Allianz Arena ended with two red cards as Stefan Ilsanker was dismissed for a wild tackle on Thiago Alcantara and Renato Sanches was shown a second yellow for pushing the Austrian in response.