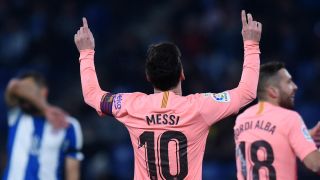 Lionel Messi was hailed by Barcelona head coach Ernesto Valverde after the captain's record-breaking performance in a derby defeat of Espanyol.

Messi scored two free-kicks for the first time in a LaLiga game while he also provided a sensational assist for Ousmane Dembele in a 4-0 win at RCDE Stadium.

Victory moved Barca three points clear at the top of LaLiga, with Messi also becoming the first player in the league's history to score at least 10 goals in 13 consecutive seasons.

Monday's Ballon d'Or ceremony saw Messi miss out on a place in the top three for the first time in 12 years and his performance provided the perfect riposte to that surprise snub.

And Valverde was delighted with the performance of Barca's talisman as Messi gave an outstanding individual showing in a dominant derby display.

"Leo unties any game, it's a good thing to be able to enjoy him because we live in an unrepeatable era," Valverde said at a news conference.

"If someone is capable of scoring a hat-trick from set-pieces is him, but that is something he did not have in his head."

Valverde previously described Messi finishing fifth in the Ballon d'Or voting as "absurd" and he again made clear his surprise at the Argentina star's placing below winner Luka Modric, as well as Cristiano Ronaldo, Antoine Griezmann and Kylian Mbappe.

"I don't know, it's something that he should answer," Valverde added. "He already has a lot of recognition, but it is striking that they vote for the best and he is not there."

Espanyol had a late consolation ruled out by VAR for offside against Oscar Duarte, but Barca goalkeeper Marc-Andre ter Stegen had little to do, much to Valverde's pleasure.

"We have been very good, especially in the first half," Valverde said. "They tried to exploit the speed of their players and we had moments that justify the result, I am happy to have kept a clean sheet and not given much away.

"Espanyol are having a great season, especially at home. Knowing that there are so few differences every game in a world in which the three points are worth a lot. We are happy because we won in a comfortable way.

"There have been games in which the rivals have created more chances against us than we are used to and in the last few we have conceded little, we are happy for that."

Barca face Tottenham in the Champions League on Tuesday having already secured top spot in Group B, with the result at Camp Nou also having a bearing on Inter's chances of progressing.

The Premier League side have to win - or better Inter's result against PSV - to follow Barca into the knockout rounds and Valverde indicated he has not decided if he would take the chance to rest Messi and his other stars.

"We will see on Tuesday," Valverde added. "We respect the competition and we want to win the game and we will pick the lineup thinking about the needs of Barcelona, not Inter, thinking about winning."