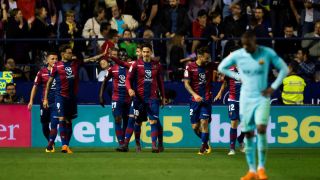 Barcelona's bid to complete an unbeaten LaLiga season collapsed in astonishing circumstances as Ernesto Valverde's champions collapsed to a 5-4 defeat at Levante.

Unheralded Ghanaian forward Emmanuel Boateng was the hero for home side as he doubled his tally of goals in Spain's top flight with a hat-trick.

Boateng's initial first-half strikes were pegged back by Philippe Coutinho but an often wretched Barcelona showing - without the rested Lionel Messi - collapsed into all-out defensive shambles after half-time.

Enis Bardhi, who hit the post in between Levante's first two goals, found a pair of sublime finishes amid the chaos and Boateng making a claim for the matchball.

Coutinho led the Barca fightback by completing a treble of his own and Luis Suarez's 71st-minute penalty had Paco Lopez's men on unsteady legs.

Suarez missed a glorious chance to equalise and Levante full-back Antonio Luna almost put through his own goal but the invincible dream perished at a raucous Ciutat de Valencia.

Suarez played in Coutinho for an early chance but the Brazil midfielder overplayed his hand – wastefulness Barca would soon regret.

Morales was to the fore once more on an attack where Boateng touched on for Bardhi to rattle the post. It seemed easier to score.

Barcelona winger Ousmane Dembele struggled to make an impression before having a 25th-minute attempt deflected behind and a disjointed showing from the visitors was punished again with half an hour played.

Thomas Vermaelen was stricken by an apparent hamstring injury and, as Sasa Lukic weaved through the Barca midfield, Boateng stole in behind temporary centre-back Sergio Busquets and rounded Ter Stegen to finish.

Gerard Pique came on for Vermaelen and the Spain defender's surge forward in the 38th minute ended with Coutinho's deflected drive flying past Oier Olazabal to reduce the arrears.

It looked a false dawn and Barca imploded early in the second half.

Jordi Alba shovelled the ball into midfield and Levante pounced with a lightning counter, Jose Campana picking out Bardhi to rifle home brilliantly from 20 yards.

Worse was to follow for Valverde as two marginal offside calls fell in Levante's favour, Luna surged on to Roger Marti's flick on and Boateng claimed his third.

Another delightful side-footed finish from Bardhi, with Marti again the provider, had Levante in dreamland.

Barcelona's heads cleared enough for Coutinho to seize upon a mishit clearance and net his second before a careering contest reached the hour mark.

Ivan Rakitic started to get a hold on midfield and it was now Levante's turn to wilt in a defensive stupor.

Coutinho earned his share of the matchball by dispatching Busquets' pass from the edge of the box, even though replays suggested the shot might have deflected off Suarez.

There was no doubt over the Uruguay striker making it 5-4 from the penalty spot after Boateng blotted his performance by coming together with Busquets at the near post.

Suarez should have equalised in the 74th minute, with Levante opting en masse against marking him but Barca's number nine headed Coutinho's free-kick over.

There was baited breath all round when Luna scuffed Alba's cross behind and, after substitute Ruben Rochina spurned a glorious chance for 6-4, Levante could celebrate a remarkable triumph.