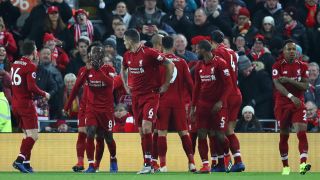 Xherdan Shaqiri scored twice to bail out Alisson following a first-half howler to secure Liverpool a 3-1 win over bitter rivals Manchester United at Anfield on Sunday, lifting the Reds back to the Premier League summit.

United looked to be on course for a commendable point after Alisson gifted Jesse Lingard a first-half equaliser, but substitute Shaqiri struck twice in the final 17 minutes to halt Liverpool's eight-match winless run against their great rivals in the league.

Liverpool deservedly went ahead through Sadio Mane's well-worked opener, but it did not last long despite their domination, as Lingard converted to punish Alisson's error just after the half-hour mark.

Chances were not so frequent after the break and United appeared to be coping better at the back, but Shaqiri – introduced for Naby Keita in the 70th minute – score two deflected goals to leave hapless United down and out.

After a frantic start, the breakthrough eventually came in the 24th minute – Mane losing his marker and coolly slotting past David de Gea after bringing Fabinho's incisive pass down on his chest.

Dejan Lovren should have made it 2-0 when he blasted over from close range shortly after, and United capitalised in the 33rd minute – Alisson inexplicably spilling a Romelu Lukaku cross and Lingard punished the Brazilian.

United had to rely on De Gea again early in the second half, as the Spaniard got down brilliantly to his left to keep out Roberto Firmino's goal-bound toe-poke.

But Shaqiri was not to be denied, as he found the net via the crossbar and a deflection off Ashley Young following Mane's cut-back.

He completed the win 10 minutes from the end, his 20-yard strike flicking off Eric Bailly to send Liverpool back to the top.

It was quite the contribution from the substitute. In contrast, Paul Pogba remained on the United bench even when Mourinho chased the game.

What does it mean? Time is running out for Mourinho or Pogba

Paul Pogba was left out of the starting XI for a third successive Premier League game, and although widely regarded as United's most talented outfield player, he still was not called for even with Liverpool heading to victory. His relationship with Mourinho looks beyond repair – surely at least one of them will be gone by the end of the season?

Switzerland international Shaqiri has been impressive since joining Liverpool, despite having to be content with a back-up role. He was that again on Sunday, but he played the part perfectly and showed just how valuable he is, coming off the bench to devastating effect.

Lukaku a road to nowhere

The woes of Lukaku in recent weeks have been well-documented, but aside from his role in the goal – which only came about because of Alisson's error – he was absolutely dominated by Virgil van Dijk, who looked at ease throughout.

Liverpool's final pre-Christmas fixture sees them travel to Wolves on Friday, while United head to Wales for a tussle with Neil Warnock's Cardiff City.