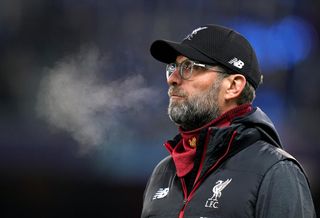 Liverpool manager Jurgen Klopp has described suggested proposals to expand the Champions League group stage to a 32-team league as “absolute b*******”.

Less than 24 hours after their 2-0 victory over bottom side Watford at Anfield, the Reds fly to Qatar for two matches in the Club World Cup.

Liverpool’s programme over December is so packed they face playing two matches in 24 hours next week, fielding a youth side in the Carabao Cup quarter-final at Aston Villa on Tuesday and the senior team in Doha on Wednesday.

Having progressed to the knockout stage of the Champions League in their final group match, Klopp has no desire to see the first half of the season extended further, which is being considered according to reports on Saturday.

“Today I read the top clubs want more games in the Champions League – I am not involved in these plans but that is absolute b*******,” he said.

“The fixtures are like they are. You all like watching us suffering. That is how it is.

“You (the media) always look concerned but no-one cares. We speak about it and no-one else speaks about it.

“We have to do what we do and are quite positive about it.”

Liverpool’s matches in Qatar have been switched because the Education City Stadium is not ready.

It means the new venue of the Khalifa International Stadium will host five matches in as many days, with both semi-finals and the final and third-place play-off taking place on one day each.

That has also not impressed Klopp.

“It think it is raining there. It doesn’t help the one pitch we are all playing on – sensationally good organising,” he added.

“All the games are on one pitch and it is raining, I am not sure the people in Qatar are used to a lot of rain.

“We will see how the one pitch will be but that is a bit of a problem.”

On the field Liverpool were made to work hard for their 2-0 victory over Watford, with Mohamed Salah scoring twice in the 38th and 90th minutes, as Sadio Mane having a goal ruled out by VAR for offside.

“I don’t celebrate goals any more, you just have to wait until someone says it is a goal,” said Klopp of the Mane incident.

The Reds boss had praise for goalkeeper Alisson Becker as a couple of good saves early in the second half ensured Anfield had its first clean sheet of the season.

“Ali was 85 minutes of the game doing warm-up exercises but in those five minutes he showed us what a goalie he is,” said the manager.

“He does a lot in these situations and we had to fight and that is how we won.”

Nigel Pearson’s first match as Watford manager showed signs of promise but his side remain bottom of the league.

They have scored just nine league goals all season and that failing cost them at Anfield.

“We created some unbelievably good goalscoring situations but were unable to convert them today,” he said.

“It is of scant reward that we leave here with nothing for our efforts in terms of points but I was very pleased with the collective work ethic.”