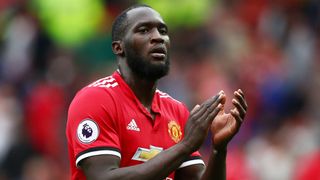 Van Nistelrooy, a striking great for United between 2001 and 2006, has been an interested observer of Lukaku since he signed for an initial fee of around £75million from Everton in July.

The Belgium international has scored three times in as many games as Jose Mourinho's side have made a perfect start to the new Premier League season, while also netting in the UEFA Super Cup loss to Real Madrid.

Lukaku still has a long way to go to reach the 150 strikes Van Nistelrooy netted for United, but the Dutchman likes what he sees.

"He's done great," Van Nistelrooy, 41, told Sky Sports of Lukaku after scoring a penalty for United in a legends match against Barcelona at Old Trafford.

"To score in your first games here after you have been transferred for a lot of money, it is nice to get that pressure out of the way and get your first goals in.

"He has done well. Not only scoring but also providing, making his runs and doing his work. So it looks good for the season."

Van Nistelrooy is well aware of the scrutiny Lukaku will come under this year and beyond.

"There's always pressure to score here – but that also makes it interesting, dealing with that," he said.

"The goals are expected and if you don't score there is a lot of talk about you not scoring. Then there's pressure on the next game."

Great to be back at Old Trafford and score this penalty. Thanks for Ruuuuuuuuuuding.. Kids loved it and are doing it all the time now. September 2, 2017

Van Nistelrooy is optimistic that United will be competing to win the top competitions under Mourinho this season, after finishing sixth along with EFL Cup and Europa League silverware in 2016-17.

"They had a great pre-season and continued that at the start of the league," he said.

"The only team with nine points, 10 goals and none against. They have had a wonderful start.

"The Champions League will start now so I'm very excited to see how they will do there. They look impressive at the moment and they can challenge this season for the big ones."