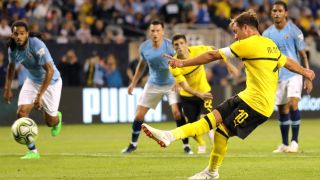 Mario Gotze scored the only goal of the game as Riyad Mahrez made his Manchester City debut in a 1-0 loss to Borussia Dortmund at the International Champions Cup.

Mahrez debuted in Chicago on Friday after completing a club-record £60million transfer from Leicester City earlier this month.

The Algeria star showed glimpses of his quality for the Premier League champions and he almost scored before half-time via a set-piece but undermanned City fell to Dortmund at Soldier Field.

Gotze – wearing the captain's armband – scored from the penalty spot in the 28th minute after Dortmund team-mate and United States star Christian Pulisic was fouled by Oleksandr Zinchenko.

Pep Guardiola's City, however, still fielded Mahrez and Claudio Bravo, with Leroy Sane and Aymeric Laporte on the bench.

City made a lively start as the English side – led by Mahrez – enjoyed some success down the left-hand side without really troubling Marwin Hitz.

Dortmund grew into the game as the half wore on and they hit the front approaching the half-hour mark.

Zinchenko was exposed by Pulisic, who received the ball and drew a foul from the Ukrainian utility inside the penalty area after Dortmund dispossessed City before Gotze converted the spot-kick.

City were caught out at the back again when Alexander Isak rounded Bravo but the Swede found the side netting from an acute angle moments later.

Debutant Mahrez almost equalised on the stroke of half-time but his free-kick was kept out by Hitz.

Joe Hart – who is seeking a permanent move away from the Etihad Stadium – replaced Bravo at the interval, while Dortmund changed all 10 outfield players for the second half.

Dortmund found the back of the net again in the second half but Max Philipp's effort was ruled out for offside, much to the relief of City.

Hart was called into action with 19 minutes remaining, the out-of-favour former England number one – who spent last season on loan at West Ham – denying Jadon Sancho.