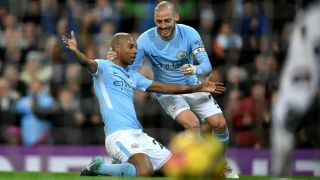 Manchester City extended their lead at the top of the Premier League to 15 points but Pep Guardiola left the 3-0 win over West Brom with injury fears over David Silva.

Fernandinho collected his third goal of the season on the end of Kevin De Bruyne's inch-perfect pass in the 19th minute but City's other playmaker – the ever-influential Silva – hobbled off late in the first half with an apparent hip problem.

De Bruyne crowned another sublime individual performance by crafting and finishing City's second and 100th of the season in all competitions, with Sergio Aguero adding his 24th of the collective haul as closest challengers Manchester United slumped to a 2-0 loss at Tottenham.

Their tilts for cups at home and in Europe could endure significant repercussions, however, if Silva's absence is comparable to Leroy Sane's ankle ligament damage that is set to keep the Germany winger sidelined for up to seven weeks.

City's failure to agree a fee with Leicester City for Riyad Mahrez on deadline day meant Aymeric Laporte's status as the club's record signing would not be short-lived and the centre-back turned in a classy performance under minimal stress from the Premier League's bottom side.

De Bruyne took control of proceedings from the off and there was a sense of inevitability about the Belgium star being the man to unpick West Brom, with Fernandinho charging on to his throughball and sliding an assured finish beyond bEN Foster.

It was almost 2-0 five minutes later when De Bruyne released Raheem Sterling to feed the overlapping Silva, who flashed a shot wide of the far post.

City's star man did not prove as adept on the end of moves, driving at Foster's left boot when deftly played in by Aguero before thrashing a shot against the top of the crossbar from the edge of the box.

The Baggies' struggles in stemming the tide were not helped by Grzegorz Krychowiak limping off – former City favourite Gareth Barry afforded a warm welcome in his place – and there was a worry for the hosts when the influential Silva pulled up and had a bandage applied to his lower abdomen.

It meant the host were operating with 10 men when Foster clawed over to come out on top in his latest duel with De Bruyne and Silva made way for Ilkay Gundogan shortly afterwards.

Gundogan shuffled effortlessly past Gareth McAuley within two minutes of the restart, but Sterling hacked wastefully wide from seven yards – he was soon consoled via a typically enthusiastic embrace from his manager.

Bernardo Silva took aim for the top corner, prompting Foster to add to his impressive body of work, while another of the challenges that have so irked Guardiola annotated City's 68th-minute second.

James McClean launched a scything hack at De Bruyne as he galloped forward on the break, but the midfielder kept his footing and laid off to Sterling before clipping the return pass into an unguarded net. McClean was booked as City wheeled away in celebration.