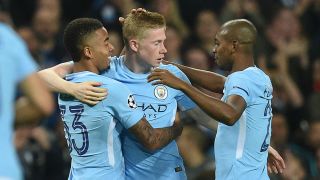 Roma sporting director Monchi believes Manchester City are the strongest team left in the Champions League, but he remains calm about the looming quarter-final draw.

Eusebio Di Francesco's men edged past Shakhtar Donetsk on away goals to reach the last eight, setting up a potential meeting against one of a number of European greats.

But Monchi believes City – relative newcomers on the biggest stage – hold the greatest threat, although he acknowledges that reigning champions Real Madrid cannot be written off.

"It is difficult to know who is the best," Monchi told Roma's radio network ahead of Friday's draw. "They are all difficult.

"Real Madrid are used to winning everything but, for me, Manchester City are the strongest of all.

"I think our advantage at the moment is that the team are mentally strong and calm about who we might face."

Monchi was a goalkeeper in his playing days and he also found time to praise Roma's current number one Alisson.

"He's so good," Monchi said of the man linked with a move to Liverpool. "But above all, he conveys a sense of calm and security to the team.

"When I played, my team-mates would joke, 'We have to score today, because Monchi won't keep them out.'"