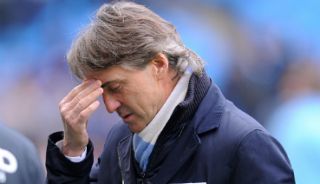 Manchester United regained the title last month with four games to spare and City were then beaten 1-0 by Wigan Athletic in last Saturday's FA Cup final.

City had also failed to progress from the group stage of the Champions League for a second successive season despite boasting one of the most expensively assembled squads in the world.

"It is with regret that Manchester City Football Club announces that Roberto Mancini has been relieved of his duties as Manchester City Manager," the club said in a statement.

"Despite everyone's best efforts, the club has failed to achieve any of its stated targets this year, with the exception of qualification for next season's UEFA Champions League.

"This, combined with an identified need to develop a holistic approach to all aspects of football at the club, has meant that the decision has been taken to find a new manager for the 2013/14 season and beyond."

Media speculation has been rife that Malaga coach Manuel Pellegrini was being lined up as a replacement but the Chilean denied late on Sunday that he had spoken with City and said no agreement had been reached.

Assistant manager Brian Kidd will be in charge for City's remaining two games of the season and the post-season tour to the United States.

"This has been a difficult decision for the owner, Chairman and Board to make and it is the outcome of a planned end of season review process that has been brought forward in light of recent speculation and out of respect for Roberto and his extensive contributions to the Football Club," the statement said.

Former Inter Milan manager Mancini joined City in December 2009, succeeding Mark Hughes, and that season led them to a fifth-place finish which was at the time their best ever Premier League showing.

The club splashed the cash before the next season, bringing in the likes of David Silva and Yaya Toure as they went on to finish third, qualifying for the Champions League for the first time, and beating Stoke City 1-0 in the final to win the FA Cup.

It was the end of a 35-year wait for a trophy and a tangible reward for the huge funds invested by the club's Abu Dhabi owners.

Having been criticised for a conservative approach to games under Mancini, much changed the following season when the Italian brought in Sergio Aguero and Samir Nasri and City became a stylish goal-scoring machine that lit up the league.

A 6-1 victory over then champions United at Old Trafford proclaimed their serious title credentials and a fascinating battle with their neighbours ensued with City snatching the title on goal difference in the dying seconds of the season.

Hoping this might be the start of many titles to come, City's defence of their crown never really got off the ground this season.

Mancini placed some of the bl