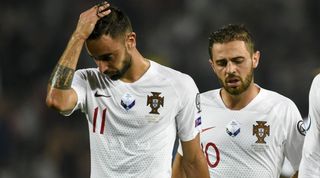 Manchester City's Silva has commented on Fernandes' arrival in England as he looks forward to a complicated relationship.

Manchester United have finalised the signing of Fernandes from Sporting Lisbon for a reported fee of £46m plus add-ons and bonuses that could reach near the £67m mark.

The Red Devils will be breathing a sigh of relief after a long, twisting pursuit that stretches back to last summer has reached a positive end.

This season has been no different, with Fernandes notching 14 goals and 13 assists in the first half of the campaign.

United fans will be the 25-year-old can continue his fine form as the club push for the Champions League places.

United's rivals City were believed to be in the running for Fernandes' signature last summer but their interest dissipated.

Bernardo Silva could have been welcoming Fernandes as a teammate but instead, he's got a new rival in town.

"I'm very happy for him. It's a big step for his career, which he deserves," Silva told A Bola (via the Mirror)

"He's going to play for one of the best clubs in the world."

"We're going to be rivals but I wish him the best, apart from against us, obviously."

Despite them locking horns on the pitch in the future, Silva hopes Fernandes will join him for dinner off it.

"I'm pleased he'll be in Manchester and I hope we can go out to dinner from time to time," he said.

"Changing country is always difficult, but it's not Bruno's first experience abroad and with the quality he has he'll adapt well."