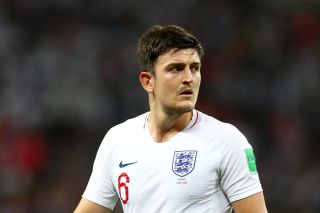 The deal for the 26-year-old is now subject to a medical.

Maguire was strongly linked with both Manchester clubs over the summer but Leicester held out for their valuation and will receive a world record fee for a defender, eclipsing the £75million Liverpool paid Southampton for Virgil Van Dijk in January 2018.

The deal comes after Maguire was left out of the Leicester squad for their friendly against Serie A club Atalanta at the King Power Stadium on Friday night.

United had made strengthening the centre of their defence a priority at the start of the summer, with the need only becoming more acute when Eric Bailly suffered a knee injury during their pre-season tour of China which is expected to keep him out for at least four months.

The deal represents a tidy profit for Leicester, who signed Maguire for an initial £12million – potentially rising to £17million with add-ons – from Hull in the summer of 2017.

The Foxes were in a strong negotiating position after the Sheffield-born player signed a new five-year deal in September.